Kenya Skykes Monkeys , Cercopithecus albogularis mitis, is also known as the White-throated Guenon. These are forest monkeys which live and travel in family groups with up to a dozen or more members.

They feed in the morning and late afternoon in the forest canopy but they descend to lower levels during the hottest parts of the day.

They mostly feed on leaves, fruit, shoots, flowers, bark, fungi, lichen, grass etc but they also eat insects, eggs and young birds. We have first-hand experience of both their taste for fruit and their ingenuity in getting it.

In January 2000 we were staying at Mountain Lodge on the slopes of Mt Kenya. Mindful of the monkeys we closed all the windows in our room and went out for a walk.

When we returned there was chaos in the room, a troop of Sykes Monkeys had spotted a bowl of fruit in our room and had discovered a faulty slat in the louvre window.

The combination of the two things was too much for the monkeys and they orchestrated a raid on the room ..... there were bits of chewed fruit everywhere!

As we were cleaning up, 2 monkeys came back to the room to see if there was anything left to steal, so keeping very quiet we watched as they carefully inserted their fingers into the faulty bit of window and worked the louvre open again .... At least it proved to the hotel staff that it wasn't just us being careless! 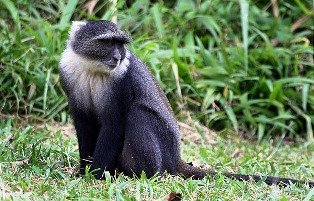