Do you need to know how to prepare a Kenya oysters Mombasa recipe for your guest? This site will guide you on all the steps needed to do so.

Whether or not the Swahili and other African peoples of the Eastern African coast traditionally ate oysters does not seem to be well documented. There are very few recipes for oysters in African cookbooks, and those that there are come from Western Africa.

Thus, it seems possible that Oysters Mombasa originated among expatriates in Africa during the era of British colonialism in Kenya.

Mombasa, an island-port city on the Indian ocean, served as the gateway to the "white highlands" and "Happy Valley" of Kenya for European settlers arriving by ship. It's easy to imagine jazz-age European elites eating oysters like this in Mombasa's hotels and restaurants.

To this day, Kenyan oysters are featured on the menus of restaurants and resorts, mostly frequented by tourists, along the Kenyan coast.

Mombasa is Kenya's second-largest city and its chief port. For centuries before the city was visited by Vasco da Gama in 1498,

Mombasa was a center of the Arab slave and ivory trades. It was part of the Portuguese empire during the 1500s and 1600s, and was then ruled by Oman, Zanzibar, and finally Great Britain until Kenyan independence.

Fort Jesus, built by the Portuguese, was often the center of violent struggles for power and is still a landmark on the city's waterfront. 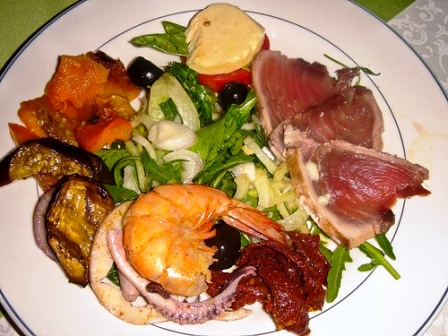