The male Kenya Greater Kudu, Tragelaphus strepsiceros, is an impressive animal with its long spiral horns and distinctive markings

The female of Kenya Greater Kudu generally don't have horns although some females do grow small ones, but like the males they also have the narrow white body stripes, broad white nasal stripe and white cheek spots.

The females travel in small herds of around 6 to 12 individuals, often accompanied by a male.

Their diet consists of leaves, buds and grass, leguminous plants are an important part of their diet.

Despite the impressive set of horns they rarely attack preferring flight to fight, even when cornered old males tend not to defend themselves. 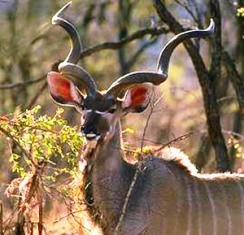