You are Here: Home › Kenya Animals and Wildlife › The Kenya Eland

The Kenya Eland, Taurotragus oryx, is Kenya's largest antelope. A male can weigh up to 942kg and a female up to 600kg. Males grow bigger and get heavier throughout their life and their dewlap (the large flap of skin which hangs below the neck) also increases in size as male’s age.

Kenya Eland have scent glands on their hind legs just above the hooves so they leave a scent trail as they walk through the grass.

They are mostly found in woodland and, despite their massive size, they are rather shy animals and disappear silently into the trees if disturbed.

They browse on herbs and foliage and their system is adapted to a high protein, lower fibre diet. They can tolerate tough, aromatic food and eat myrrh and bush willow. Kenya Eland also eat acacia seed pods and marula fruit but are attracted to the early flushes of greenery that you get after the rains.

Kenya Eland are gregarious but they don't stick to a single herd and there is movement between groups.

They band together in open areas for protection and also come together in impressively large numbers in response to the appearance for greenery after showers and thunderstorms.

Females and young animals tend to be more nomadic than males (particularly older males) and they also form larger groups.

Kenya Eland is really a beautiful animals to watch. Despite their size they nevertheless seem graceful as they appear and disappear silently. 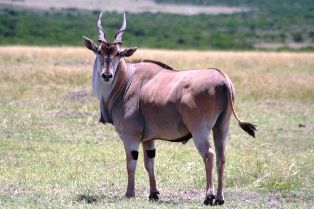