You are Here: Home › Kenya Animals and Wildlife › Kenya Common and Grevys Zebras

The latter species was named after french president Jules Grevy who was presented with 3 animals by the King of Ethiopia.

Kenya Common and Grevys Zebras lives in the drier regions of Kenya and can be seen in Samburu and Buffalo Springs.

t is the largest of the wild equids and has very large rounded ears, it is however much easier to distinguish them from the pattern of stripes.

In the Kenya Common and Grevys Zebras the stripes are broad and continue down into the belly, in Grevy's they are very narrow and they stop on the lower flanks leaving the belly clean and unmarked. 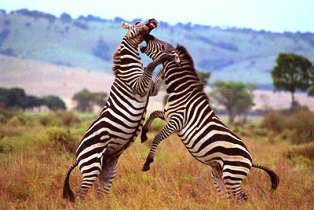