You are Here: Home › Kenya Animals and Wildlife › Kenya Cheetah

Kenya Cheetah is another Cat animal in Africa and Kenya in Particular. On this page learn more about the cheetah and its behaivour.

One of the world's fastest land animals, the Cheetah, Acinonyx jubatus, is another solitary cat. It has a distinctive sleek, streamlined shape with long legs and a very flexible spine. This makes it ideally suited to taking its favourite prey, Thomson's Gazelle.

It can switch direction and twist and turn with remarkable agility for an animal of its size. Unlike the rest of the cats, Cheetahs do not have retractile claws but they do have the most magnificent low purr when resting and content.

One of our first ever encounters with a Cheetah in the wild was when we parked close to a family group consisting of a female and her 3 male cubs.

The young were a bit over 12 months old and ready to set out on their own but the group was resting in the sun after a good meal.

We suddenly became aware that our bus was vibrating, despite the engine being switched off, and after puzzling for a while realised that it was the sound of the group purring away to themselves! 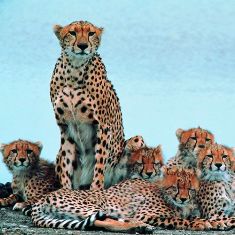