This latter eating habit brings them into conflict with man (many farmers in Kenya make a marginal living and the loss of an entire crop to a passing elephant is a serious economic blow).

Interestingly Elephants are somewhat partial to over-ripe and fermenting fruits .... which can cause them to get drunk! These long-lived animals are one of the few that show recognition of one another even after death.

Females will stand watch over their dead young and may even cover the body with branches and twigs. One of the best places to see Elephants is at Amboseli. This is the home of "Echo" the matriarch of one of the herds studied by Cynthia Moss and featured in the book and documentary "Echo of the Elephants" 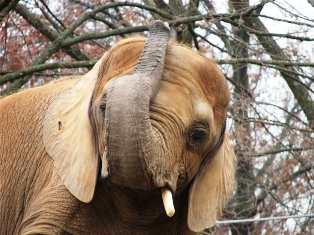