You are Here: Home › All Hotels › Kisumu Hotels › Imperial Hotel

We spent a week at the Imperial hotel Kisumu using it as a base for day tours in the surrounding region.

The staff and service were excellent.

The rooms had been refurbished and were comfortable and spacious.

The pool was nice after a hot day with a nice relaxing deck around it.

The breakfast was first rate. I would recommend the hotel to anyone wanting to spend time in Kisumu. Internet service was fast and free.

Our room was on the second floor, facing a side-street. We had no problems with street noise nor from the 24 hour Country Kitchen restaurant in the building facing our room.

The room was clean and comfortable, with functioning (and welcome) airconditioning.

As I need overnight electricity for travel and tourism reasons, I'm happy to report that the hotel provided this with no powercuts whatsoever during my stay.

Other Hotels and Lodges


The TV worked, though some of the channels were scrambled, and the bathroom was well-equipped with an excellent shower and loads of hot water, sufficient towels and toiletries replaced when necessary without prompting.

Breakfast was served from 6.30 am, and when we brought guests to breakfast, the hotel welcomed them as though they were residents. On the occasions when we had to leave the hotel before breakfast on early trips, the packed breakfast provided was generous and tasty.

We didn't eat in the restaurant at night, but noted that the menu was extensive ...though the prices were not particularly cheap .. and there was a varied room service menu also available for those who might wish to take advantage of it.

We used the pool - unheated so a bit of a shock to the system, but then it'll save you the need for a Tusker! - and found that it was large enough to swim a fair lap in, though you proved to be a source of entertainment for all those enjoying the bar and seated around the pool! Changing facilities were adequate.

The hotel has a business centre with computers, and wifi - for a nominal charge - is available throughout the hotel ... we used it in our second-floor room and in the bar on the top floor of the hotel where there are good views of the lake and the town.

The staff were efficient and friendly, in particular the reception front desk staff and the doormen.

This is not really a resort hotel, but for businessmen and for those who need a central base it is ideal. Situated about 5 mins level walk from the main street (Odinga), it is a safe walk even at night, and there are plenty of tuk-tuks and taxis to take you further afield.

The local restaurant opposite the hotel will fit the bill for a meal at all times of the day should you decide not to eat in the hotel. And it's also just a couple of minutes level walk from the Duke of Breeze hotel whose rooftop bar merits a stop, especially at sunset and the evening. 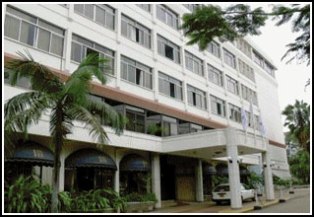