You are Here: Home › Kenya Animals and Wildlife › Grants Gazelle

Grants Gazelle, Gazella granti, is a large, rather pale, gazelle with a distinctive leaf-shaped mask around its eye. It has a white rump and the base of its tail is also white, this feature is emphasised by the dark stripe down the back of each thigh.

Females occasionally also have a dark stripe along their flanks. These gazelles are often found in mixed groups alongside other herbivores e.g. Wildebeest, Zebras and Thomson's Gazelle.

They may occur in large numbers (up to 500 individuals) in suitable areas. They eat herbs and the foliage of shrubs most of the time except at the start of the wet season when they eat the grass while it is young and green. 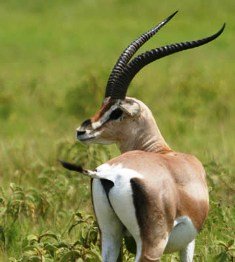