Eden Rock Hotel, is built on a coral cliff about 4 metres above the level of the tide, composing two main buildings with bungalows on 70,000 sq meters of large tropical park with large trees, flowers and shrubs.

Eden Roc Hotel has 15 luxurious suites and 150 self-contained rooms which are classified into standard and superior rooms.

Suites and rooms have a sea view and can be booked either as singles or doubles.

The hotel being under Kenya and German management, gives the advantage to prepare various delicacies of African and European tastes. The hotel chefs can also cater to specific dietary meals. It has a newly refurbished a la Carte "Dhow Grill".

Other Beach Hotels and Vacation Villas

Eden Roc Hotel is located in Malindi along the serene North Coast of Kenya, about 120 km from the famous harbour town of Mombasa City center.

Eden Rock Hotel has 15 luxurious Suites and 150 self-contained rooms which are classified into Standard and Superior rooms. 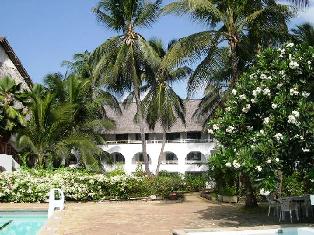