Dar es Salaam means "House of Peace" in Arabic. For a city which such a name it is a surprisingly busy and lively place where it is sometimes hard to find some rest.

There's plenty of accommodation in Dar es Salaam, ranging from centrally-based modern hotels to stylish boutique guesthouses and more and more travellers are choosing to spend more than one night in Dar to experience the vibe of this fascinating city.

From the way the city centre is built you can understand that it was once a small town without much traffic.

The city has grown quite fast since independence, partly without much planning, and now has a population of almost two million.

The city was founded in the 19-th century by the Sultan of Zanzibar who needed a port on the mainland.

The main sights are the very colourful Kariakoo Market and clock tower, the National Museum, and the Botanical Gardens. All of these are either in or not far from the city centre.

About 10 km from the city centre along the road to Bagamoyo, you find the the Village Museum, which is also worth a visit. The best beach close to the capital is Oyster Bay.

Other beaches, with better security, our found further north along the coast.

The South Coast is also being developed and has nice beaches. The university is found "mlimani" (on the hills) NW of the city centre in what was once a rural setting but is now encircled by the city.

Looking for entertainment? You are bound to enjoy the pleasures of bars, restaurants along with the lovely beaches. Water parks are without fail, at very affordable prices.

What to See in Dar es Salaam

Hunt for bargains in sprawling outdoor market Kariokoo and Mwenge craft market. Stroll among the peacocks in the Botanical Gardens, or head for the beach –

Pick up traditional Makonde wood carvings of people and animals at the Mwenge craft market or Nyumba ya Sanaa in Upanga.

Tingatinga paintings are witty, colourful representations of Tanzanian life and are on sale all over the city.

For last-minute gift shopping, try The Slipway on Msasani Peninsula; for a more down-to-earth shopping experience, hone your haggling skills in Kariokoo market.

South Beach on Kigamboni Peninsula is popular with locals. Hop on the ferry from Kivukoni.

A boat also shuttles between White Sands beach resort in Jambiani and Mbuja Island, where you can count the yachts of the rich expats and eat fresh fish. Jump on the waterslides and go-karts at Kundichi Wet'n'Wild.

Don't miss the Indian food at Anghiti, or communal Ethiopian fare of curried meat and vegetables on a base of spongy bread at Addis in Dar.

Indian restaurants in Upanga serve vegetarian dishes and no alcohol – Retreat is the best of the lot.

Be warned though: like all seaports, Dar es Salaam has its dangers. You are strongly advised not to wander around the city at night in small groups, particularly around the port and on the beaches north of the city around Kunduchi.

Never exchange money on the streets with the touts who offer you "best rates in town". They will either be rip-off artists who cleverly pad a wad of shillings with blank paper, or undercover policemen who will give you a warning but keep your dollars. The Tanzanian shilling is, in any case, a regulated currency, and the black market will yield scant rewards.

The city itself is an eclectic mix of Swahili, German, Asian and British architecture, reflecting its colonial past and more recent history.

It is a relatively new city - Sultan Majid bin Said, then the sultan of Zanzibar, saw the potential of Dar es Salaam as a deepwater port because of its strategic position at the centre of the East African coast.

In 1866, the Sultan began work on his palace, built of coral blocks hewn on Changuu Island off Zanzibar. But he died before its completion and the palace fell into ruin - but not before he gave the tiny port its name - "Haven of Peace".

Eleven years later, the German colonialists revived the plan and seized Dar es Salaam from its Arab rulers, fighting off an uprising by the local Bushiri tribe.

The Teutonic order they imposed on the chaotic little port is reflected today in the neatly laid out grid patterns of streets fanning out around the port, and in several grand edifices scattered around the waterfront, most notably the German Hospital, the Lutheran Church and St Joseph's Cathedral.

Hear hooves pound on the sand and feel the wind in your hair while horse riding at Amani Beach, or visit the mysterious ruins at Kundichi for a glimpse into Dar es Salaam's murky past.

Feel like taking a trip to the lovely Island of Zanzibar? Why not? The ferry picks you up at the Harbor, located by Forodhani Primary school, and drops you off, in Zanzibar.

How long does a trip like this take you ask? Try about 4 hours, but you will be guaranteed that those hours are worth it. Give it a try and you wont regret it. Enjoy! 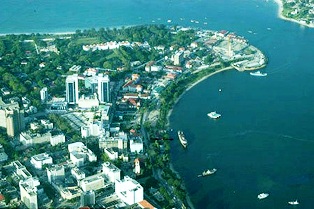 Other Cities and Towns in Tanzania