Crime in Kenya - How to Avoid Kenya Criminals

You are Here: Home › Facts about Kenya › Crime in Kenya

Need information about Crime in Kenya? Here is a page you must read. It’s one of the countries biggest problems. However, if you stick to some common-sense rules, your stay in Kenya should be trouble-free. This page informs you about the biggest dangers.

All in all, during the day the worst thing that will happen to you is encountering a scam artist or, if you don’t watch your valuables, being pick-pocketed. If you go out after dark, take taxis.

Also, don’t make the mistake of distrusting all Kenyans just because of the few rotten apples. Most locals hate crime in Kenya just like you, and they will go out of their way to help you stay safe. Kenyans in shops, your hotel etc. can tell you exactly where it’s safe and where it isn’t.

In the cities, besides police there are many private guards (askaris) on the streets and in bank offices, etc. Most hotels and resorts are fenced and/or have private guards during every time of the day and night.

This is probably the most common form of crime in Kenya. Especially in Nairobi, you’ll likely to run into confidence tricksters and other people who play on the emotions and gullibility of foreigners at some point. They use various tricks, among them claiming to recognize you from the hotel or some other place.

One popular scheme involves them telling you they’ve enrolled in a university in your home town (the amount of research they do is astonishing!). At a certain point, they’ll ask for money in some way.

Another trick is to create feelings of friendship, give you some present, and then emotionally blackmail you to into giving something (cash) in return. If unknown people start calling you “my friend” every other sentence, be wary. Don’t give any money.

If you want to donate, better do this through an established, trust-worthy help organisation. In general, scam artists are harmless – even funny - as long as you recognize them and just withdraw from them.

Crime in Kenya - Pickpocketing and Bag-Snatching

These are common forms of crime in Kenya as well, and occur typically during the day in crowded places. If you’re arriving with your luggage at the airport or a bus or train station, take a taxi from there straight to your hotel.

Most accommodations have safes where you can store your tickets, passport, etc.

When going out, keep your money and valuables under your clothes in a money belt. You can also buy cheap sunglasses and watches everywhere, to wear in less-than-secure places.

Try not to behave too much as a tourist, e.g. being absorbed by your guide book on the street while your camera and wallet are bulging out of your pockets.

Crime in Kenya - Muggings and Robberies

Contrary to pickpockets, these heavier crimes typically happen after dark, or in abandoned areas.

Armed robberies happen, too. After dark, you’ll be safe if you take taxis. During the day, you should also avoid walking in deserted areas.

While matatus (cheap private minibuses) are considered safe during the day, there have been cases of abductions of matatus at night.

Criminals get in as passengers, and pull a weapon to force the matatu to go somewhere where you’ll be robbed of valuables.

The last years, the police has cracked down on the outlawed Mungiki sect, a secretive politico-religious group.

They want to return Kenya to their traditional African origins and strongly disapprove of Western-style modernization. They are heavily involved in crime. However, as a traveler, you will notice very little of the Mungiki. 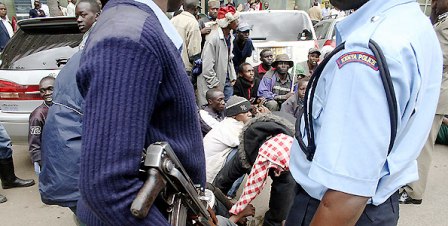